The History of America's Credit Union.

America's Credit Union is proud of its historical legacy in the Garland community. We have grown, adapted, and expanded our credit union and membership as the years have passed.

We are thankful for the opportunity to serve our community and we are looking forward to the future!

Founded on November 6, 1934, America's Credit Union (ACU) is proud of its historical legacy in the Garland community.

ACU was first formed as Kraft Credit Union at the Kraft Plant in Denison, Texas, to provide financial services at a lower cost for the salaried Kraft Food employees and their families. The original membership fee to join was twenty-five cents! 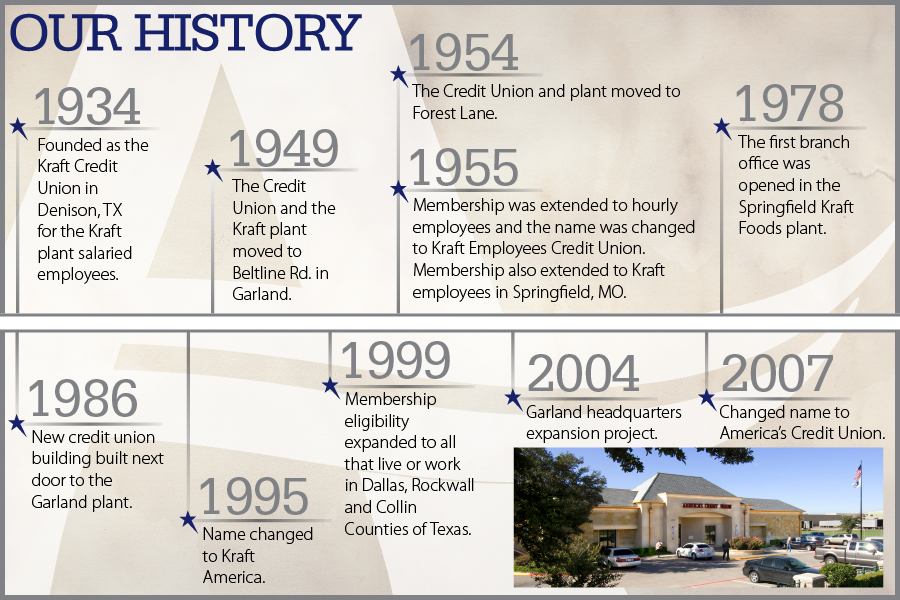 With $25 million in assets and 5,600 members, the Credit Union built its own building next door to the Garland plant (see groundbreaking image). This new facility was opened in 1986. This location provided a full service credit union with drive through lanes, safe deposit boxes, employee break room and private offices.

In 1995, in order to reflect the nationwide direction of membership, the Credit Union adopted Kraft America as its name. In 2007 the name was changed to America's Credit Union.

A community field of membership was approved in 1999, and later expanded, providing membership eligibility to all who live or work in Dallas, Rockwall and Collin Counties of Texas.

ACU also serves employees of over 100 companies locally and nationwide.

In February 2004, ACU embarked upon a major building project to update, improve and expand its headquarters by eighty-five percent. This included a two-story addition with an Education Center and additional offices. An employee fitness center was also added.

During the 1980s ACU had two mergers, with this trend continuing into the 1990s, when six more CUs were merged. Another 10 were merged from the 2000s to the present, bringing the overall total to 18.

The merger with 1st Garland Community Federal Credit Union in 2008 was the largest, adding approximately 5,800 new members and $56 million to ACU's assets.

The GO Federal Credit Union merger in 2021, added 15,000 new members, over $135 million in assets and new products and services for all members.

Today, ACU has more than 100 employees, with nearly $400 million in total assets, and over 33k members nationwide.